The GV2050 project is implemented by The Charles Darwin Foundation and Galapagos National Park Directory. Financially, the project is possible thanks to the unmeasurable support of COmON Foundation, The Leona M. and Harry B. Helmsley Charitable Trust, and BESS Forest Club.

The Galapagos Verde 2050 research team is composed of highly qualified professionals: biologists, agronomist, and field assistants. Additionally, the project has the support of local and international volunteers collaborating with The Charles Darwin Foundation. 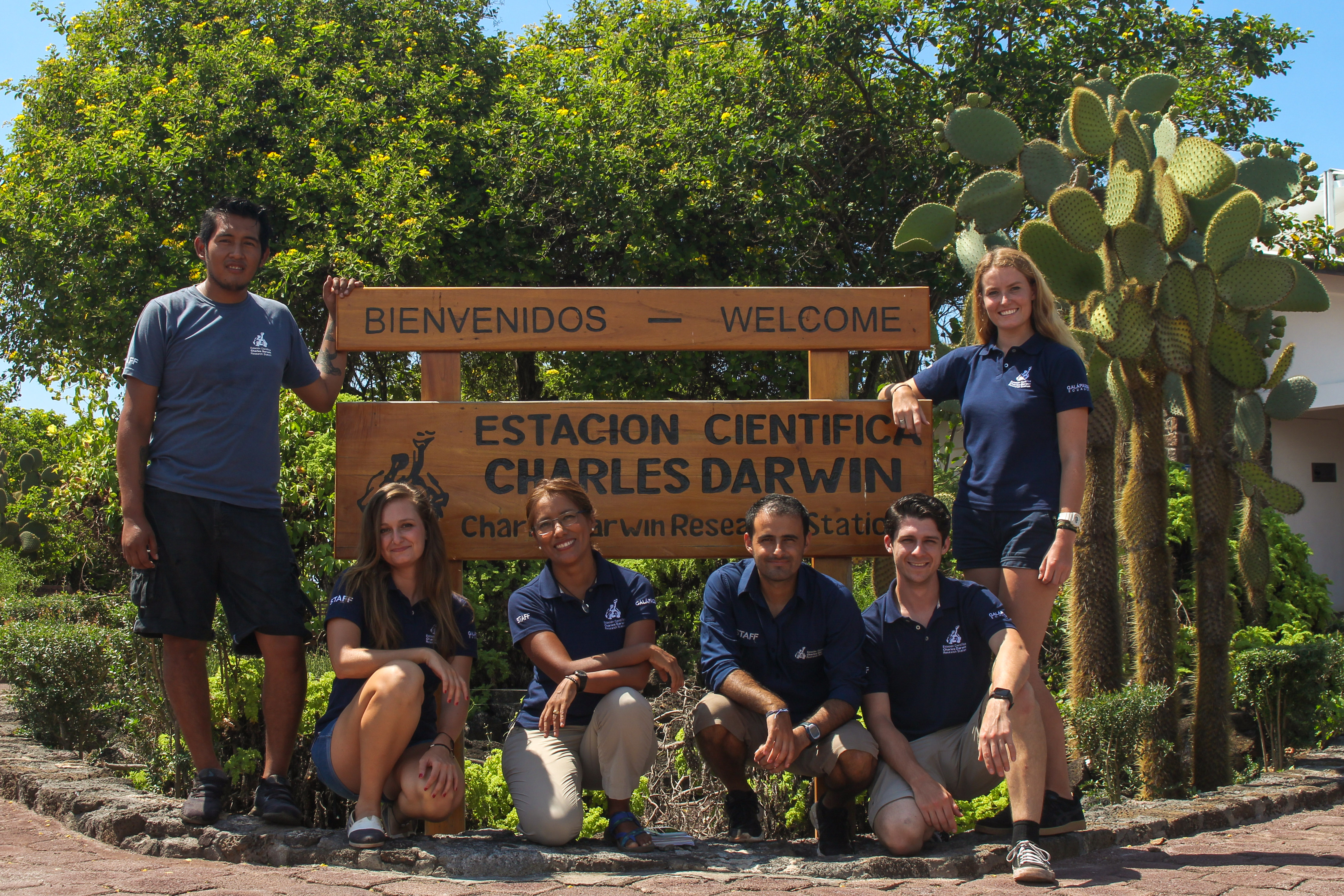 The most involved partner in the project is The National Park Directory, with whom the pilot ecologic restoration project on the islands of Baltra, Floreana, and Santa Cruz was developed. The GV2050 project also coordinates with The Autonomous Descentralized Government of Floreana, General Captaincy of Puerto Ayora, Ecuadorian Air Force, Ecological Airport of Baltra, Santa Cruz Municipality, La Iguana Foundation, and The Biosecurity and Quarantine Regulation and Control Agency for Galapagos. 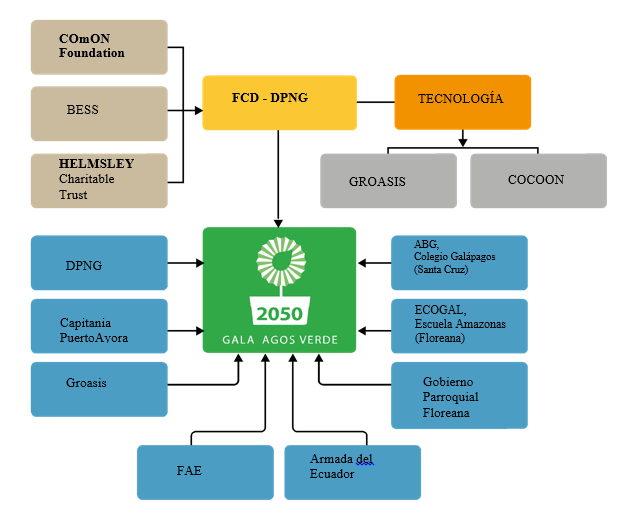 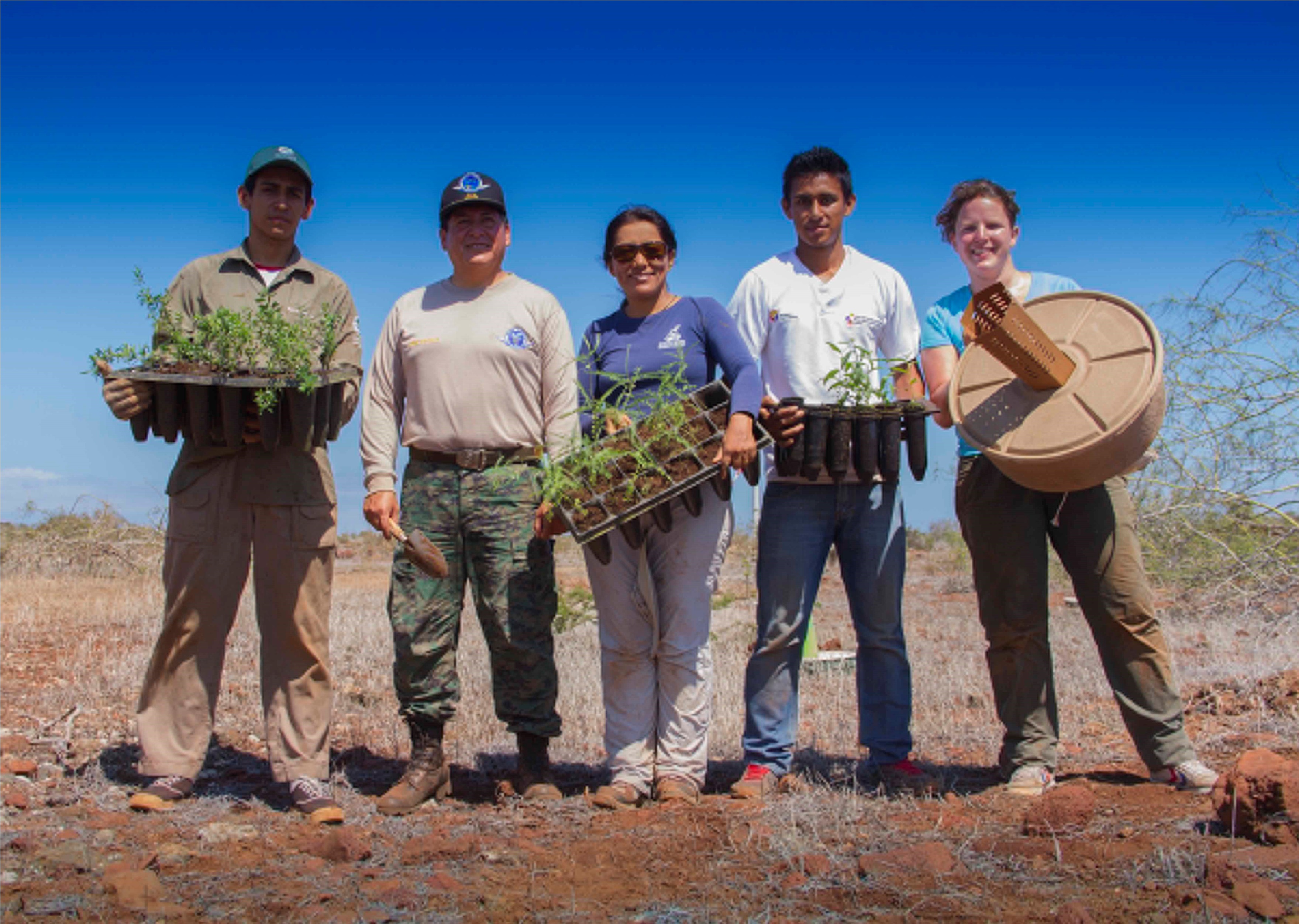 Galapagos Verde 2050 started with a agreement in 2014 between Fuente de Vida Foundation of Ecuador, as a representative for the Dutch organization Groasis, and the Charles Darwin Foundation, with an initial financing from COmON Foundation. The objective of this agreement was to develop a pilot project to test the Groasis Technology in the Galapagos Archipelago.

The Charles Darwin Foundation considered the possibilities of using this technology as a tool for ecological restoration, and coordinated with The Galapagos National Park Directory to execute a pilot project. The project was implemented under the guidance of the Galapagos Protected Areas Management Plan, the Conservation and Restoration of Ecosystems, the Wise use of the Ecosystem Services and its Biodiversity for Conservation and Development program, and the Ecuadorian Government. Two strategic approaches were established: a) ecological restoration and b) sustainable agricultural practices. 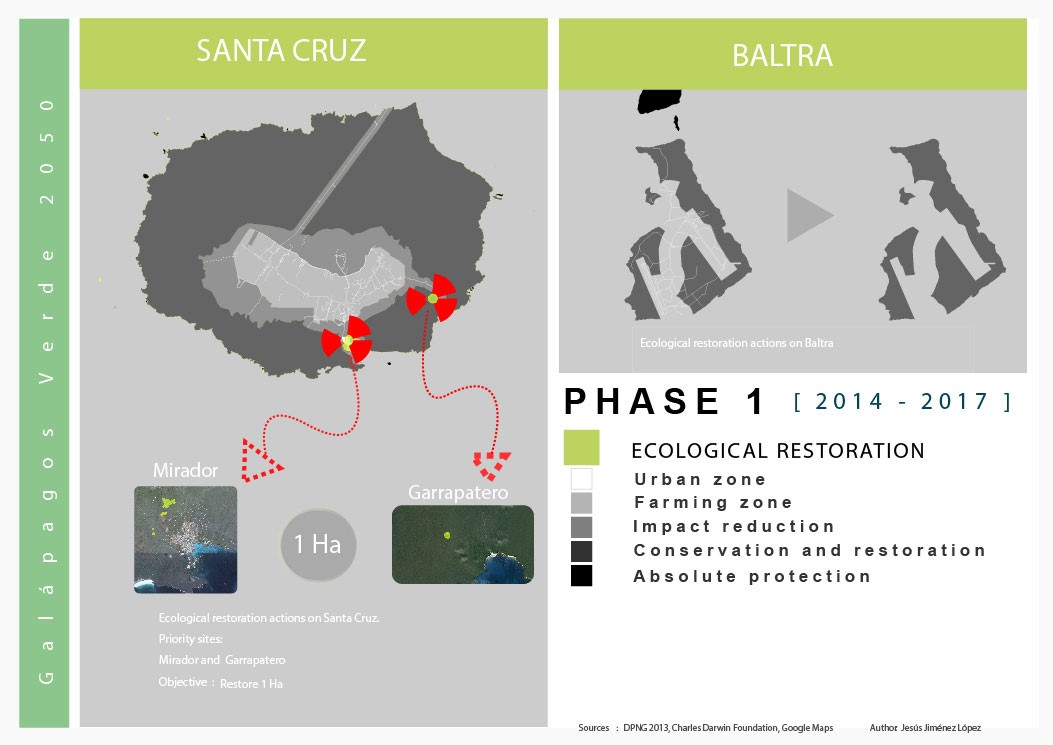 Preliminary results in ecological restoration and sustainable agricultural practices indicated that the Groasis Technology was effective on insular conditions such as the ones in the Galapagos, and thus, the implementation of GV2050 was deemed viable. Some examples can be seen with native and endemic species tested during the pilot project in the ecological restoration component. 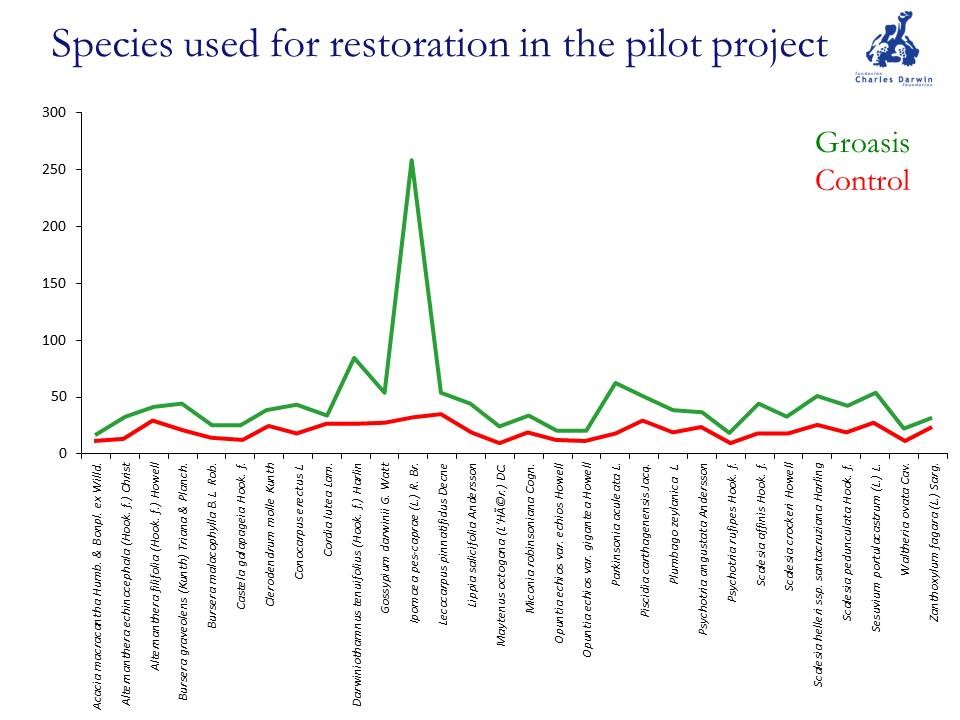 The Galapagos Verde 2050 project consists of three phases in order to meet their ecological restoration and sustainable agriculture targets by 2050. 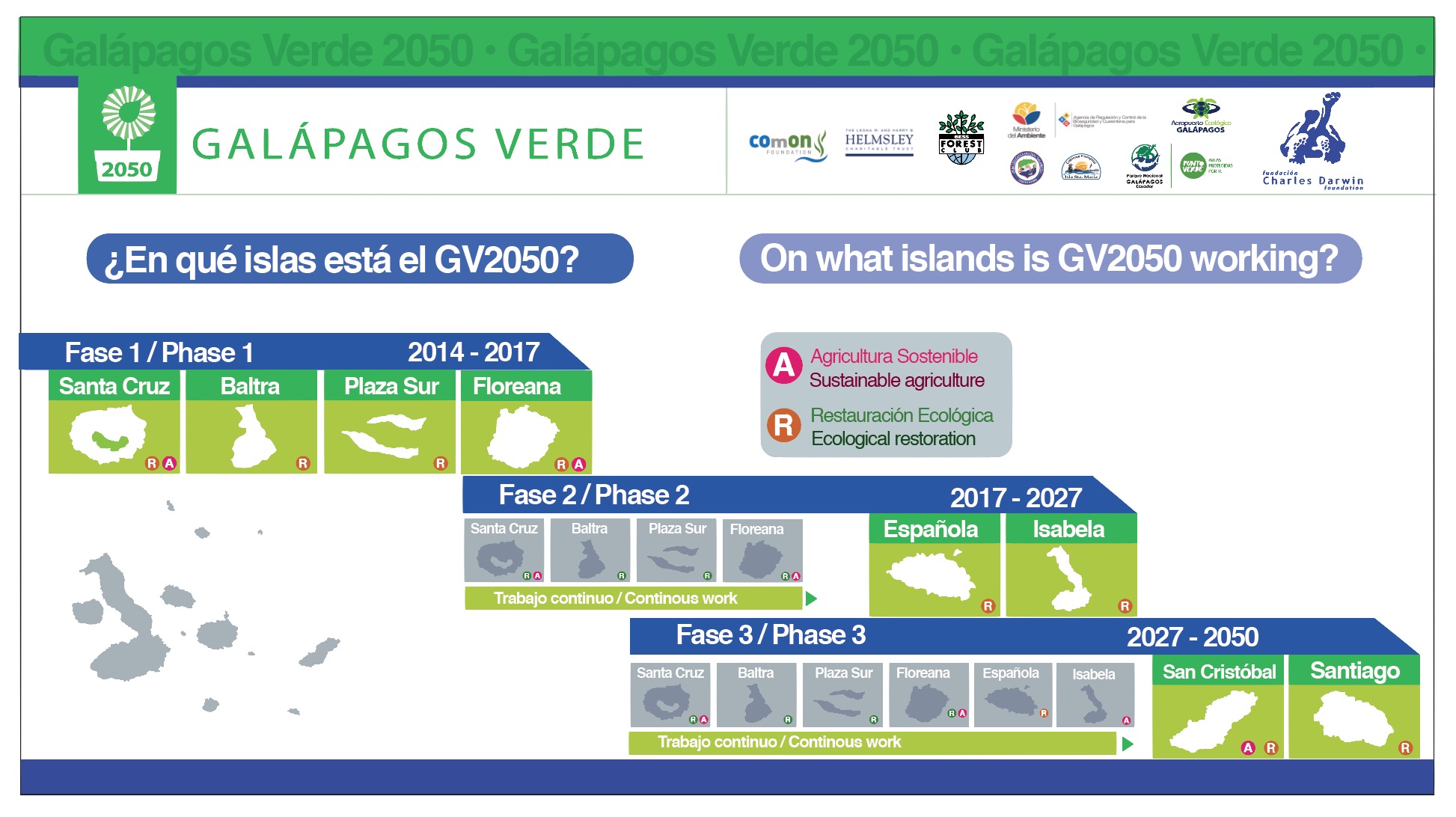 WHAT HAVE WE DONE SO FAR? WHAT WILL WE BE DOING? 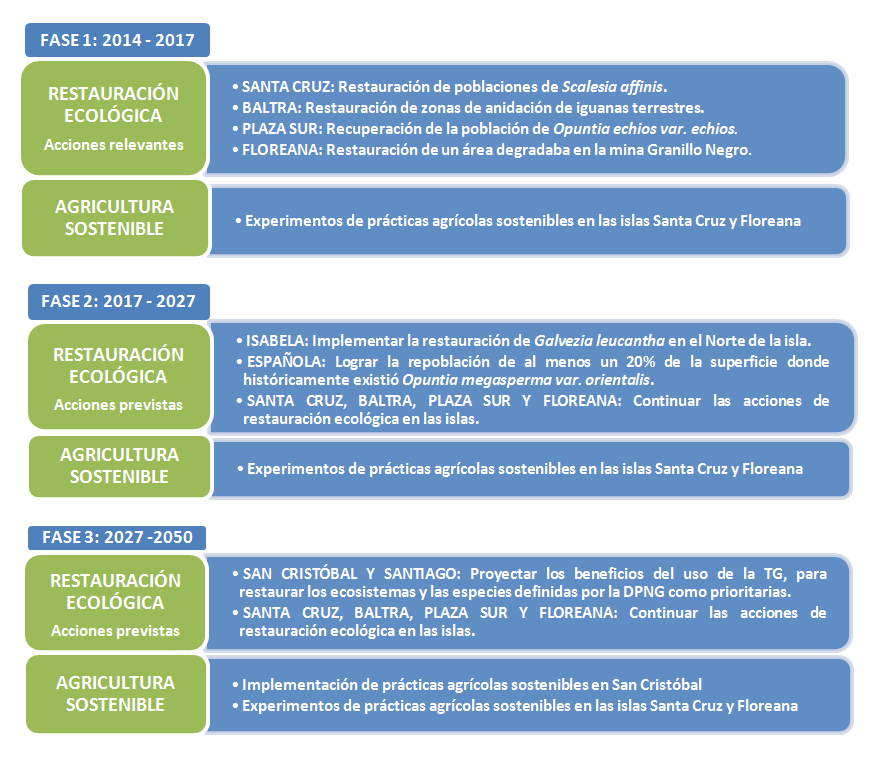 Water-conserving technologies are very effective tools for ecological restoration and sustainable agriculture practices, particularly in places like the Galapagos where water is limited or expensive. Thus, these technologies make it possible to sow in the Galapagos Islands.

WHAT IS A GROASIS AND COCOON? 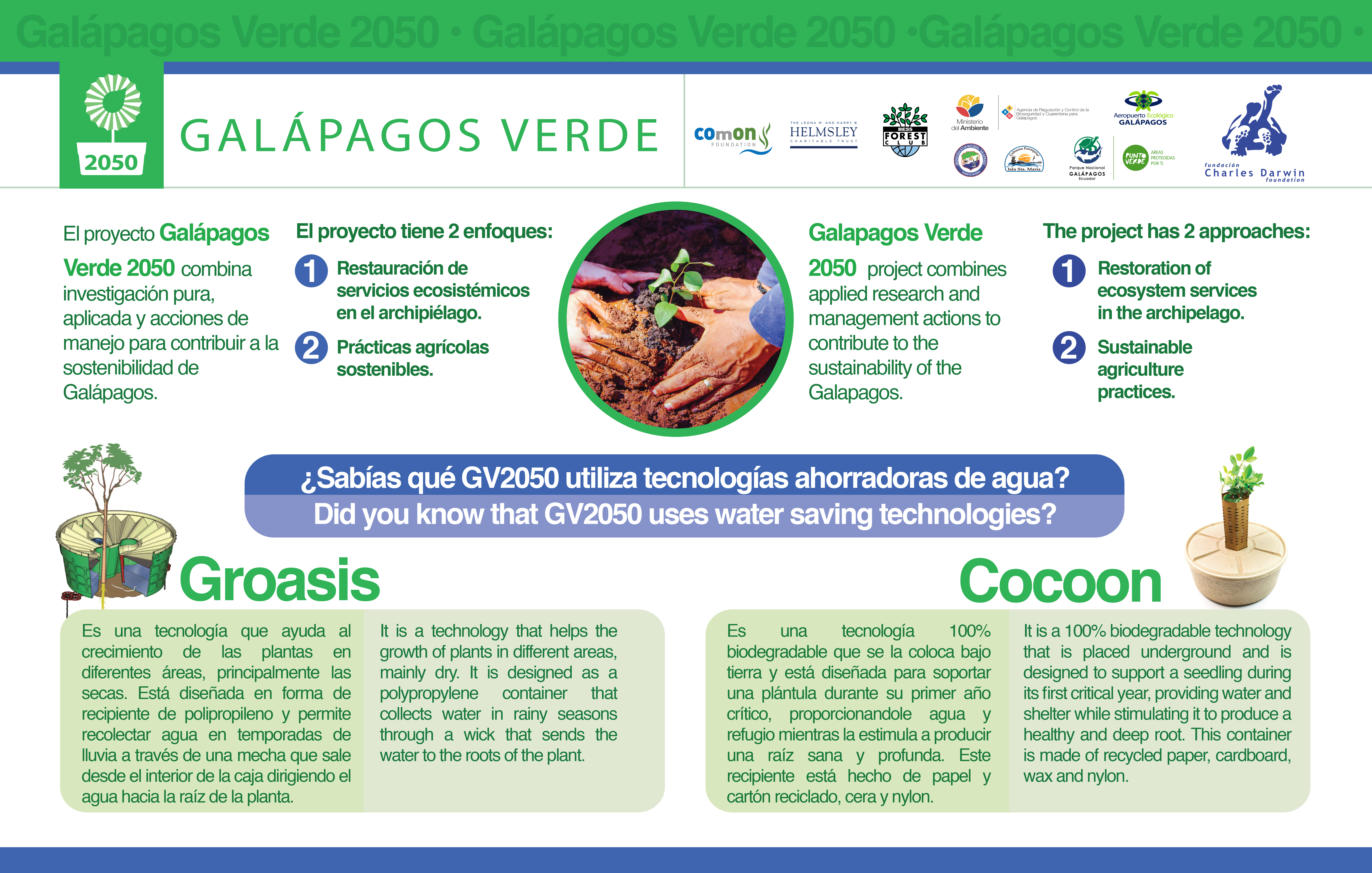 HOW DOES THE GROASIS AND COCOON TECHNOLOGIES WORK?

The technologies provide water to the plant continuously through percolation in the ground and in turn promote vertical root growth. Once the plant reaches a sufficient size to develop optimally on its own the Groasis technology is withdrawn. The Cocoon technology is biodegradable. 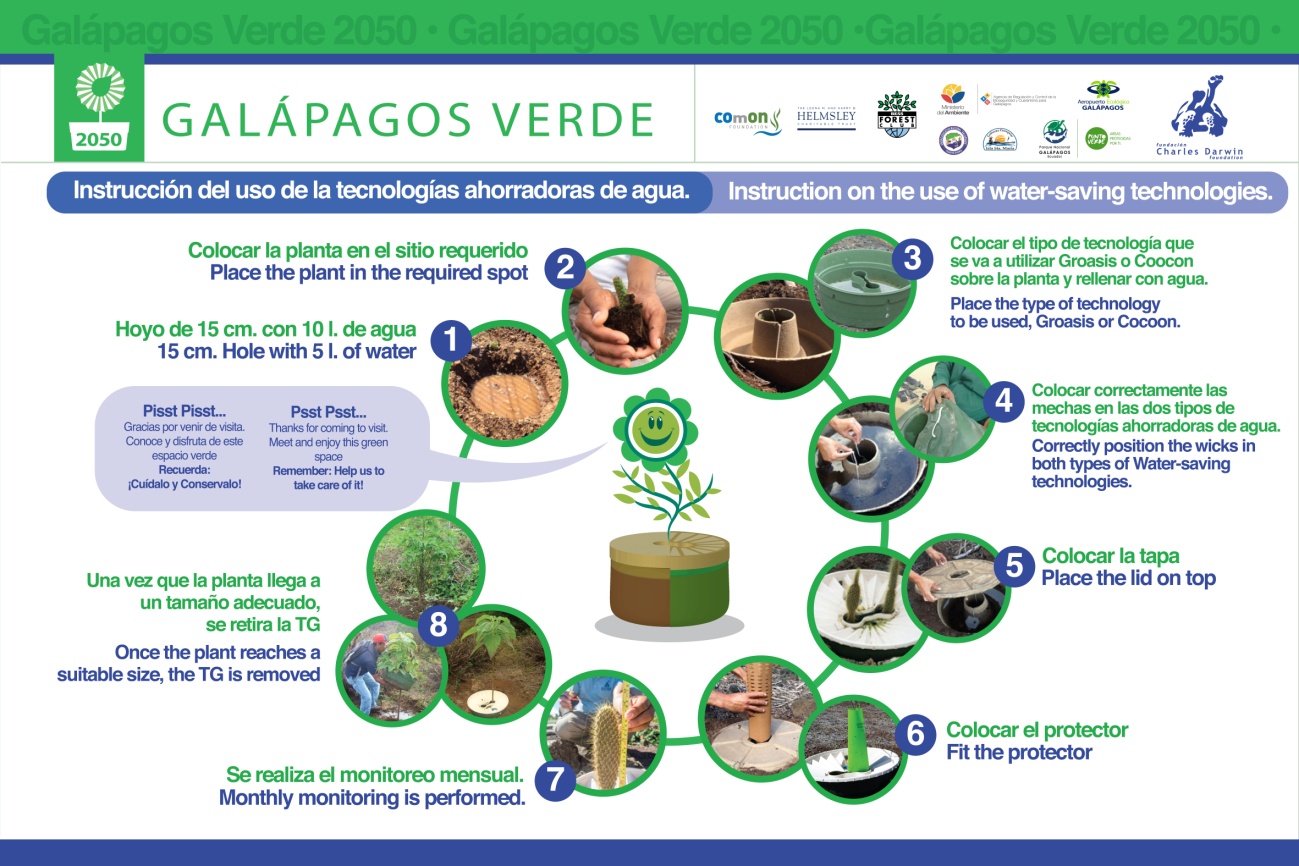 WHICH SOILS DO WE WORK IN? 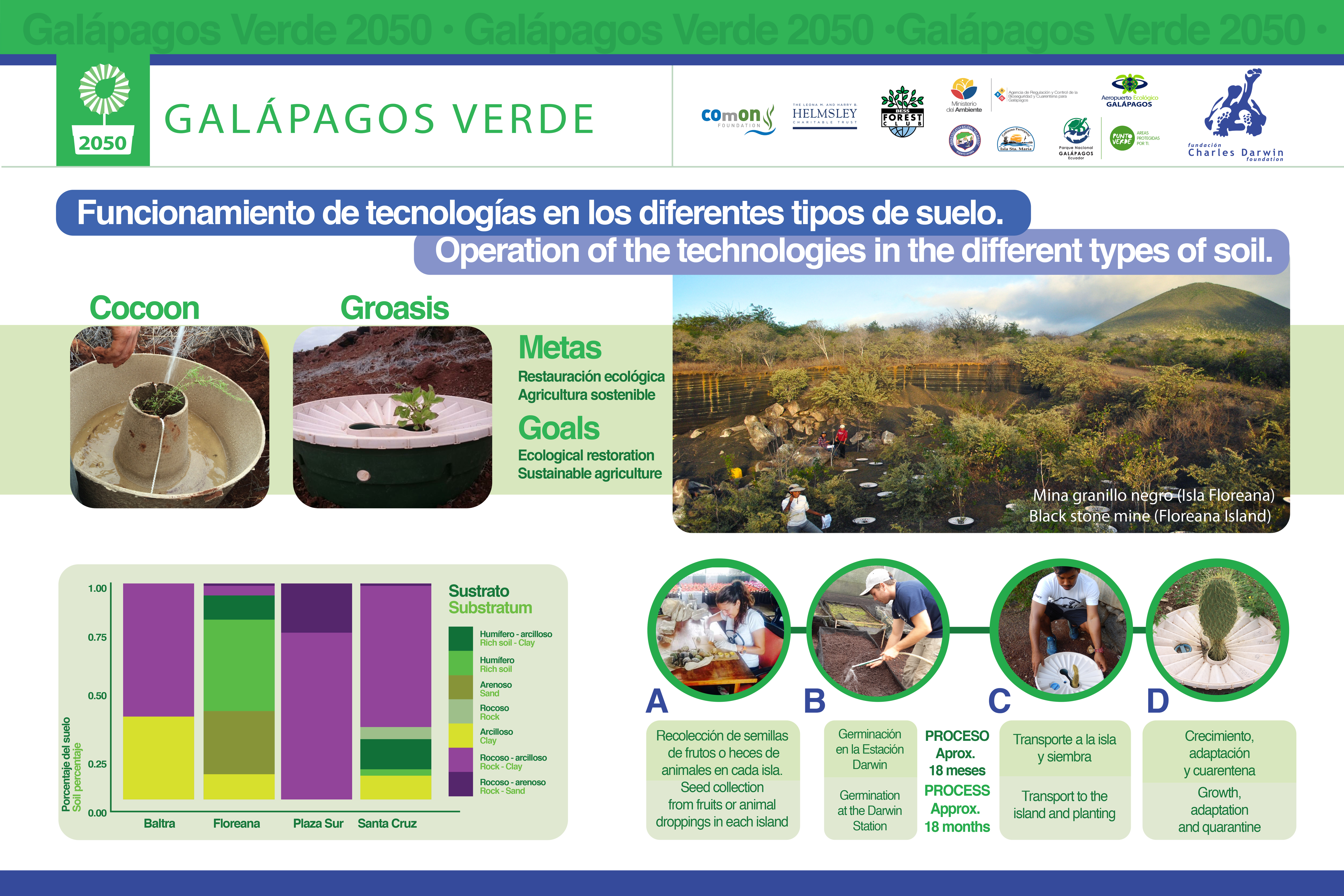 The restoration process of endemic species begins with the collection of seeds from these species on their island of origin by the GV2050 team:

The germination process happens at the GNPD nursery, located on 100 hectares of agricultural land on Santa Cruz Island. It is nestled between the humid and transitional zones and has an area of approximately 2400 m². 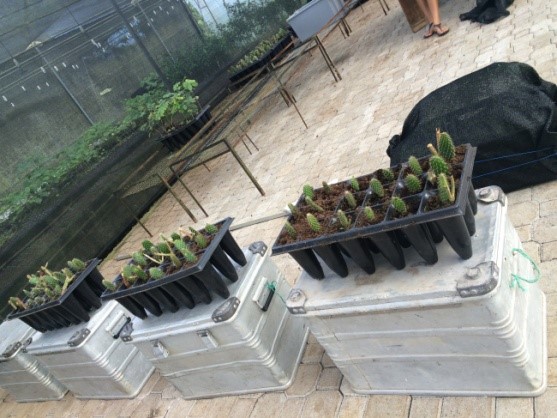 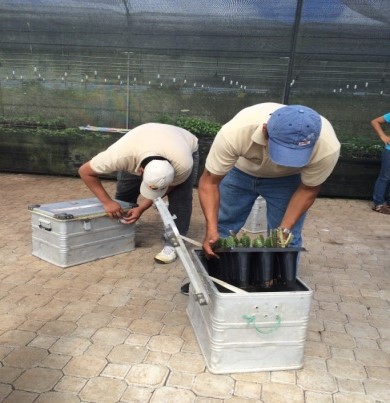 When transporting the seedlings from Santa Cruz to the other islands, the Alive Organisms Transportation Protocol established by Galapagos National Park Directory is carefully considered. Once on the islands, we transplant the seedlings using these water-conserving technologies: Groasis and Cocoon.

SUSTAINABLE AGRICULTURE: LOOKING TO THE FUTURE

In the last couple of decades, population growth in the Galapagos Archipelago has generated the permanent need of product importation from the continent mainland. These products constitute a risk of plagues and illness for the local crops.

By using Groasis and Cocoon technology for the agricultural production, GV2050 strives to achieve self-sufficiency with a sustainable production, an alternative to the intense hydric resources used with conventional agricultural practices.

We work with local farmers from different populated islands, achieving the priority objectives covered in the sustainable agriculture practices, for example, family crops.

The second phase of GV2050, commencing November 2017, will be working in rural areas. Using ecological restoration actions, the key objective is to promote the recovery of altered ecosystems within farms. GV2050 is presentlu evaluating the productivity and cost-benefit of the use of water-saving technologies in the production of first-necessity products in Santa Cruz and Floreana.